I just received my Sorapot from Joey Roth last night. The Sorapot is such an incredibly novel little thing. The aesthetic design is beautiful. It is minimalistic, but still has a kind of flair to it. I love the semi-sphere structure. First thoughts on it? It is incredibly solid. The main cast aluminum pieces that make up the frame seem like they could take a fall without more than a cosmetic scratch or two. The fact that the glass canister is removable also makes cleanup a lot easier than your standard teapot. Just wash the canister in some warm soapy water if need be, then put it back in and fill it up with a little hot water, then swish it around and drain.

The functionality of the pot itself makes getting tea into and out of it a tad cumbersome (just a little awkward what with the folding frame), but it’s sturdiness gives you enough confidence that at the very least you aren’t going to break something with a careless mistake. I found that it was less awkward if you lay the Sorapot on it’s side as opposed to it’s end while loading the tea in. When you do it this way loading actually goes pretty quickly, and isn’t as awkward. This technique would not, however, work if there was too much liquid in the canister since it would leak out when you go to loosen the retaining nut. You’d have to pour the excess out and then open it up, taking a bit of care not to leave a big bunch of tea leaves at the front.

Also, you can’t exactly pour the Sorapot like you can a normal top-loading teapot. Because the Sorapot has no opening to let in air like is usually present in the lid of a regular pot, you have to pour slowly at first, to leave a little gap in the spout for air to get in while the tea is rushing out. It starts to gurgle when you pour too (think of it like what happens when you try to drain a soda bottle by simply turning it all the way upside down). Not a huge deal, and I’m not sure how you could deal with that without ruining the aesthetic. The breather hole would have to be in the glass canister itself somewhere, which has complicated consequences design-wise. The only thing I could think to do would be to have a notch in the canister at the top lid that would let air in. There could also be a tab in the aluminum where the two meet so you know they are aligned correctly (i.e. so you don’t accidentally put the notch on the bottom and get hot water all over when you go to fill it with water), with the notch in the glass being a bit deeper than the aluminum tab to create a small hole, sort of like a “u” inside a “U” if you get my meaning.

One nice detail I found was that Joey was thoughtful enough to put a little groove in the inside of the spout to make it pour without a lot of drippage, as sometimes happens with less well-made pots. It’s little things like that that make a big difference sometimes. This and the nice box that it came in, wrapped in a rope (hemp?) ribbon, with a nice little bag of pretty tasty tea and a friendly note definitely make it apparent that Joey is not skimping on the details. 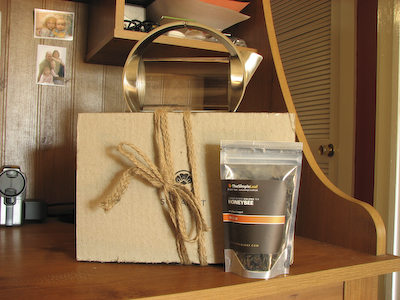 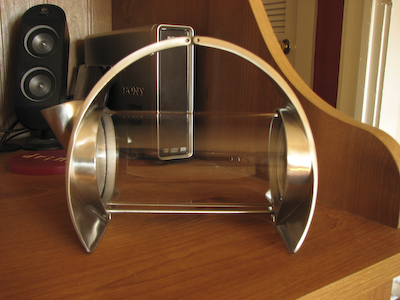 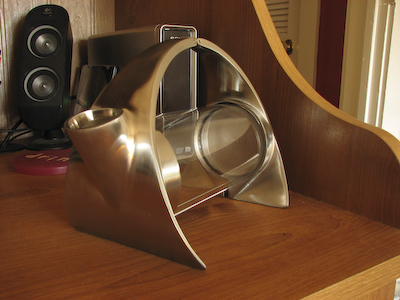